Chimney fires are a serious matter, and can cause hundreds, if not thousands, of
dollars in property damage. In the last three years, approximately 72,500 chimney fires
occurred in the United States, causing about $92 million in property damage and
resulting in 30 deaths. 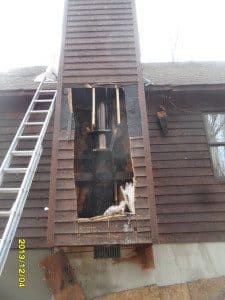 In November of 2013, a chimney fire damaged a home in Louisa County.  The fire was not catastrophic only because some residents were home and awake. This fire was caused by a wood stove being placed too close to combustibles (OSB, Oriented strand board … similar to particle board). The
combustibles were behind a stone facing, which is a common problem. Many people
think stone acts as a heat barrier. In fact, stone is a very good conductor of heat and the
heat was simply transferred to the board underneath, which spontaneously caught fire
after a process called pyrolysis lowered the combustion temperature of the wood.

Always follow the manufacturer’s instructions and ensure proper clearances! When a
manufacturer refers to a “heat shield” or “protected surface” it means a noncombustible
material with a 1″ air space between the combustible and the heat shield — it must be
open on 3 sides or at the top and the bottom allow air to freely circulate behind the heat
shield.

While there are many possible factors contributing to any chimney fire, the most
common is the buildup of creosote, whether glazed or powdery, which results from
incomplete combustion of a wood fire. In addition to burning well-seasoned wood in a
responsible fashion, it’s important for homeowners to make sure to have the chimney
and fireplace cleaned and inspected each year by a certified hearth professional. Not
only will the sweep make sure that the chimney is clear of creosote and other buildup,
but he or she can provide information about any damage (loose pipes, damaged
masonry, etc) which may interfere with the safe, efficient operation of wood-burning
appliances. 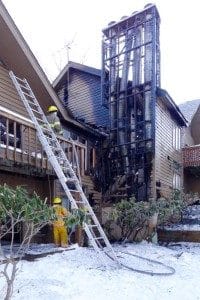 Damage to the three units was catastrophic. All three had to be completely gutted and
rebuilt. In early February of 2012, several units in the Laurelwood Condominiums at
Wintergreen Resort were damaged by what initially appeared to be a chimney fire.
Investigators later determined the fire to have been the result of sparks coming from the
firebox and getting into a gap between the firebox and hearth extension in one of the
units. A protective metal strip was not installed as required by code and the
manufacturer. Wooden Sun has been retroactively removing the hearth and installing
the missing metal strips, a costly but necessary repair.

Installing fireplaces safely is important! Make sure to check the required clearances to
combustibles for your wood-burning appliance, use adequate hearth protection
(insulated hearth pad, stone hearth, etc), and never leave an open fire unattended.
Additionally, a spark guard or screen door can keep burning embers in your fireplace where they belong, rather than on your carpet or furniture. Finally, always remove fireplace ash to a metal container, rather than plastic or wood, and never place the container on a combustible floor after removing ashes. Embers can remain hot for days, and any ashes should be treated as though they had burning embers in them.